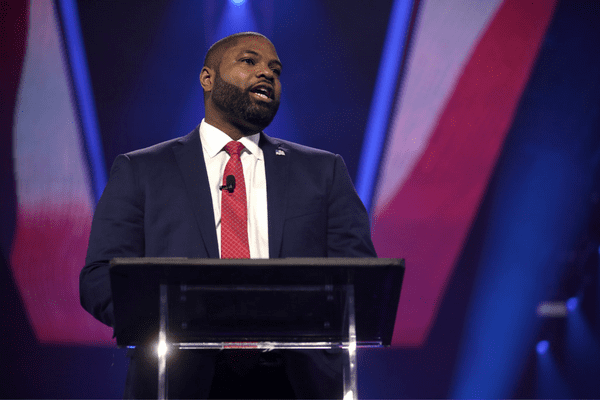 “Squad” member Rep-elect Cori Bush, D-Mo., was called out as a “racist” for calling Republican Rep-elect Byron Donalds, Fla., a “prop” after GOP lawmakers nominated him to be Speaker of the House vote on Wednesday.

The latest votes for House Speaker included Donalds’ name as well as Democrat Leader Hakeem Jeffries, both being the first two Black candidates nominated for top leadership of both parties.

However, Bush denied that Donalds’ nomination was “historic,” insisting that Donalds as a Republican perpetuates “white supremacy.”

“[For what it’s worth], [Donalds] is not a historic candidate for Speaker. He is a prop,” Bush tweeted. “Despite being Black, he supports a policy agenda intent on upholding and perpetuating white supremacy. His name being in the mix is not progress—it’s pathetic.”
Donalds responded to Bush’s tweet, saying that no one asked for her opinion.

[For what it’s worth], nobody asked @CoriBush her opinion on the matter. Before you judge my agenda, let’s have a debate over the policies and the outcomes. Until then, don’t be a crab in a barrel!,” Donalds tweeted.
Washington Examiner columnist Tim Carney wrote, “Reminder: When a Democrat pretends something is about race they simply mean it’s about party. A Democratic politician calling someone racist should never ever again carry any weight with honest observers.”

“Guessing @mkraju won’t be strapping on the trainers and chasing down every Democrat in the halls to get their thoughts on this one,” The Spectator contributing editor Stephen Miller joked.
Club for Growth senior analyst Andrew Follett commented, “This just in… Cori Bush is a massive racist who thinks she gets to control how other people vote because of their skin color. That’s pathetic.”

“This is racist. Pure and simple. Regardless of what you think about the Speaker vote, reducing Byron Donalds, a Black man, to nothing but a “prop” because he’s a Republican is absolutely gross and racist,” Canary CEO Dan Eberhart wrote.
As a lawmaker, Bush has fought against what she describes as White supremacy, which includes celebrating the Fourth of July.

“When they say that the 4th of July is about American freedom, remember this: the freedom they’re referring to is for White people. This land is stolen land and Black people still aren’t free,” she tweeted in July 2021.
More recently, Bush appeared to accuse her Republican colleagues of pushing “White supremacy” during a House Oversight and Reform Committee in December.

“Thank you, madam chair, for convening this important hearing, and let me say to the witnesses, thank you for your testimony. Thank you for staying, and sorry you have to listen to the White supremacy raise its ugly head, you know, throughout this hearing,” Bush said.